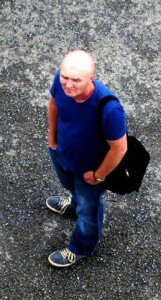 John W. Sexton was born in 1958 and is the author of five poetry collections including The Prince’s Brief Career, (Cairn Mountain Press, 1995), Shadows Bloom / Scáthanna Faoi Bhláth, a book of haiku with translations into Irish by Gabriel Rosenstock (Doghouse, 2004), Vortex (Doghouse, 2005) and Petit Mal (Revival Press, 2009). His fifth collection, The Offspring of the Moon, was recently published by Salmon Poetry (Spring 2013). He also created and wrote The Ivory Tower for RTÉ radio, which ran to over one hundred half-hour episodes from 1999 to 2002. Two novels based on the characters from this series have been published by the O’Brien Press: The Johnny Coffin Diaries and Johnny Coffin School-Dazed, which have been translated into both Italian and Serbian. He has recorded an album with legendary Stranglers frontman, Hugh Cornwell, entitled Sons Of Shiva, which has been released on Track Records. He is also the blog poet Jack Brae Curtingstall. He is a past nominee for The Hennessy Literary Award and his poem The Green Owl won the Listowel Poetry Prize 2007. Also in 2007 he was awarded a Patrick and Katherine Kavanagh Fellowship in Poetry.

It is a blessing on everyone in the Kilkenny Arts Office that the young poets in this county have a good home for their work. Long may this wonderful publication Rhyme Rag exist.

I’m looking for poems that are solid in description rather than ones that are too abstract. If your poems are concerned with emotions then please remember that these will only convince a reader if the reader can feel the emotion you are describing.

There are no restrictions as to theme, and I actually like to see a variety of themes in each submission. Poems can be rhymed or unrhymed and in any style. When you submit to Rhyme Rag please send between three to five poems for each reading period.

I will reply to submissions as soon as possible, but if you don’t hear immediately then please don’t get anxious; it may very likely be that your poems are still being considered. Remember, we will receive quite a few submissions but can only take a small fraction of what is sent to us. Don’t get discouraged if your work is not taken; try again in the next submission period.